Alright, this post is snow joke. Also, if you don’t like Christmas-themed puns you should probably leave because otherwise yule be sorry. No getting incensed on this blog, y’hear?! Buckle into your sleighs, because this one is going to be one wild reindeer ride!

A friend contacted me and asked if I would be willing to make her a Christmas quilt. Being the lover of Christmas (really the whole season) I am, I eagerly accepted. Especially since I have had the mistlefortune to never finish a Christmas quilt myself. (But, side note, JoAnn had a huge sale back at the beginning of the month and I got myself about 12 yards of Christmas fabric for about $35. Woo!)

You’ll be happy to be informed that I had the presents of mind to design this quilt myself, and didn’t make it from a kit or steal an idea off Pinterest (although that is where we started looking at first).

I took a simple Irish chain design and added a couple of borders. The Irish chain was the part that was the easiest. It went sledding rapidly down the hill from there. It’s not that the design was hard, it was just time intensive. 238 2.5” HST meant a LOT of cutting, trimming, and line drawing. I used the 8 at a time method, and it STILL took longer than the applique and main part did together. It was snow frustrating. Honestly, the worst part wasn’t the time it took, it’s that because it is a holiday quilt I had a deadline to get it done, so I had to do it quickly.

When arranging the border HSTs I did it in such a way that it almost looks like a DNA strand. Yes, I will be doing this again in the (very far) future, when I’m not on such a huge time crunch. It’s the same arrangement for each row, you just flip the rows each time. I made 9 patch blocks and then put them together. The HST border is separated from the Irish chain by a simple 2.5” red border. I think it grounds the design.

At each corner, instead of doing more HSTs, I did simple but cute applique designs. The four designs were candy canes (sweet and to the point!), a poinsettia (also, right to the point-setta), Santa’s hat (blanket stitching the white part to the white background was ho-ho-horrible), and a Christmas tree (fir god’s sake, it’s definitely my favorite one!). As mentioned, I just used a simple blanket stitch on the outside of each design. 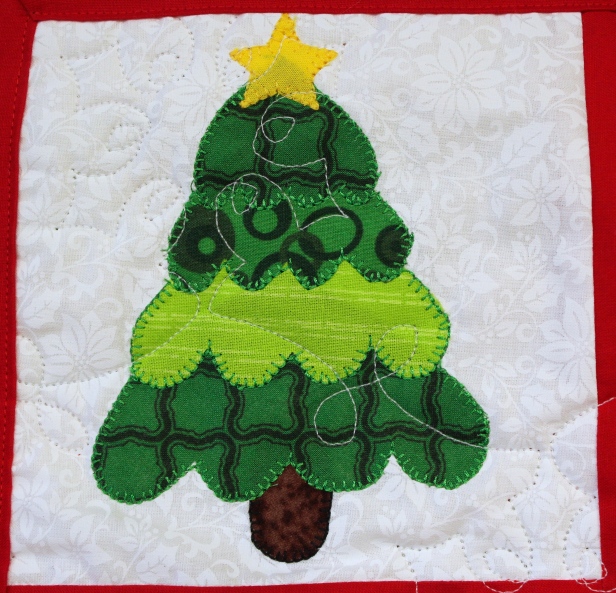 I learned a valuable lesson, however. I used some of the interfacing that helps the fabric stick on the quilt while you sew it on, and I forgot that I need to put it on the WRONG side of the fabric. I didn’t even realize it for the first few parts because they were all solids so it didn’t matter. But I had to re-cut the candy canes and the tree. I based them loosely on designs from EQ and then modified and freehand drew them on the interfacing.

For the quilting I picked a snowflake design in white to make it look a little bit like there was snow falling in front of the quilt. To be quite frank(incense), I really, REALLY like how this quilt turned out. And the design was pretty easy! I’m thinking about making this into a pattern for people to use in the future.

I guess this wraps up this post! Hopefully nobody got too incensed, and instead found quite a bit of myrrh-th from all these puns. I’ll take a bough and see myself out. Merry Christmas and Happy Holidays to all who don’t celebrate Christmas! 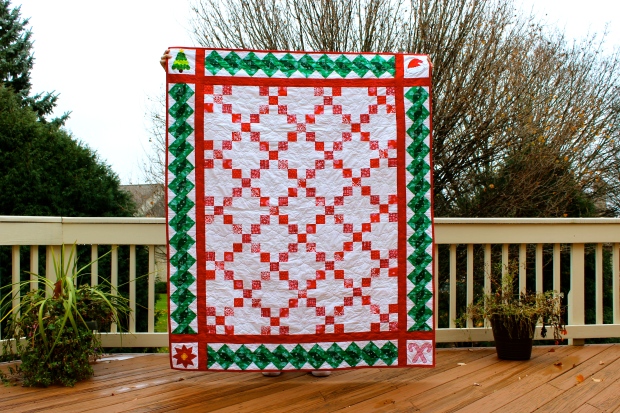 I participated in a block exchange with my quilt group last year; and since my turn was in January, I asked for spring blocks. And I absolutely loved what I received! Everything from pieced half-square triangles to intricate applique. It’s a wonderful variety!

Here’s close-up of some of the blocks: 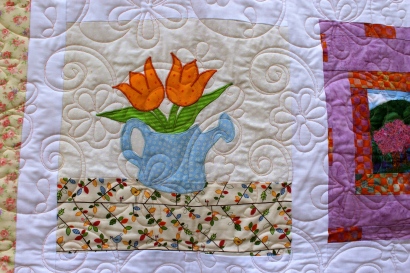 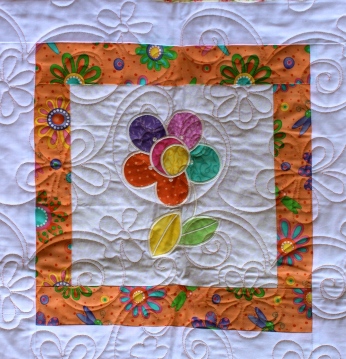 As our weather here in Virginia starts to turn from just fall to full-out winter, I thought today would be an appropriate time to remind us of what we’re missing out on. Because I’m a cruel and capricious person, that is.

To put the blocks together, I decided to just do a simple white border in between each block. I created this quilt top all the way back in January, when I wasn’t as sure of what I was doing, and so the blocks don’t quite match up with one another throughout the quilt.

But I didn’t make this quilt for a show, so I’m not too worried about it!

Sorry about the sunlight in the picture; it got REALLY sunny right as we were taking the photos. But again, all I want this quilt to do is keep me warm in the wintertime, so I wasn’t too picky with my shots. Oops!

For the border/backing, I picked out this adorable little floral print at JoAnn that I thought met with some of the fabrics in the blocks. I had it quilted in a cute little flower pattern that tied in well with the spring theme. And finally, to bind it, I actually picked out a light purple that was present (barely) in the border and backing fabric. I REALLY like how the purple ties in with the border/backing fabric and with so many of the other blocks!! 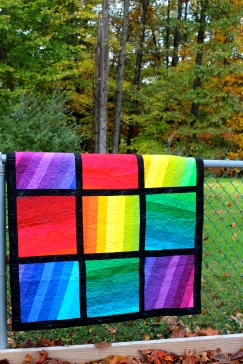 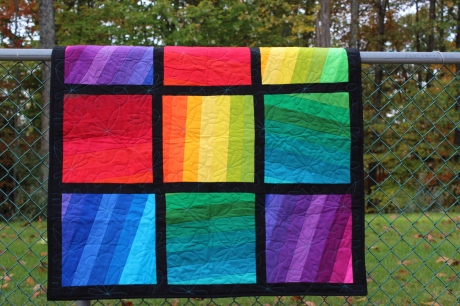 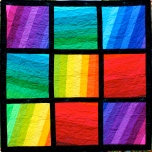 This quilt came around because I made a mistake on a much larger quilt I was making that required me to buy a new jelly roll. But I hate wasting fabric, so I was trying to figure out what I could make with the rest of the jelly roll instead. And since it was all sewn together, I decided to cut some off-center blocks from the strips.

I went with a simple black to border the blocks, and used 9 of the 10 I cut in a roughly rainbow arrangement. I absolutely adore how it turned out! It’s going to be a perfect wall hanging or a baby quilt. It’s already up on Etsy. 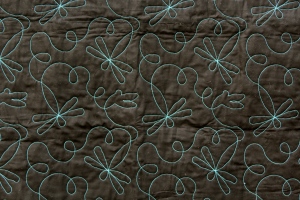 The backing is black as well, which really shows the quilting off to advantage. The quilting was done using teal thread to create whimsical dragonflies and lightning bugs. I really enjoy how much it stands out on the back of the quilt!

I’m pretty proud of how my corners and the binding turned out too. I machine bind all my quilts now, because I actually like the look if it much better than hand bound, and I think it is much more secure than when it’s hand bound.

A Happy Accident is pretty special to me. Even though it was a relatively quick and painless quilt (if only because it wasn’t planned), it holds a special place in my heart. Every time I see this quilt, I’m reminded that just because something didn’t go the way you wanted or planned it to, you can make something wonderful come from it.

My kiddo really wanted to help hold the quilt, and who am I to tell him he can’t help out?! He definitely makes the quilt better. 😉 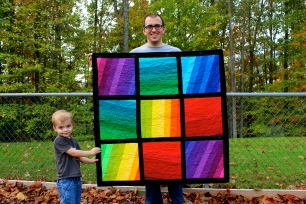 Yeah, you’ve got that song stuck in your head now, don’t you?

This is another quilt kit I found at the Mid-Atlantic Quilt Show. I was intrigued by it because even though it isn’t my normal style, I had never seen so many colors on one panel! Apparently the fabric is created using a new method, allowing for all these colors and designs. I really, really like it. And the fabric is great to work with as well!

I enjoyed making this wall hanging, and it was a pretty quick one to go together. 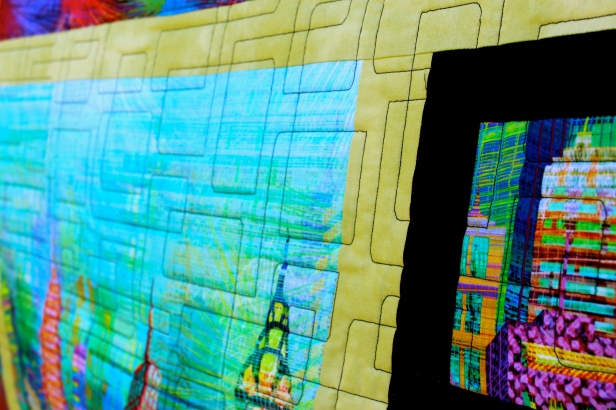 The other big news I have is that I’ve officially opened shop up at Etsy. I don’t know what will come of that endeavor (it may just be that nothing does!) but I will be happy enough just to say I’ve tried! Feel free to take a look-see over there.

Check out Lemon Quilts on Etsy!!